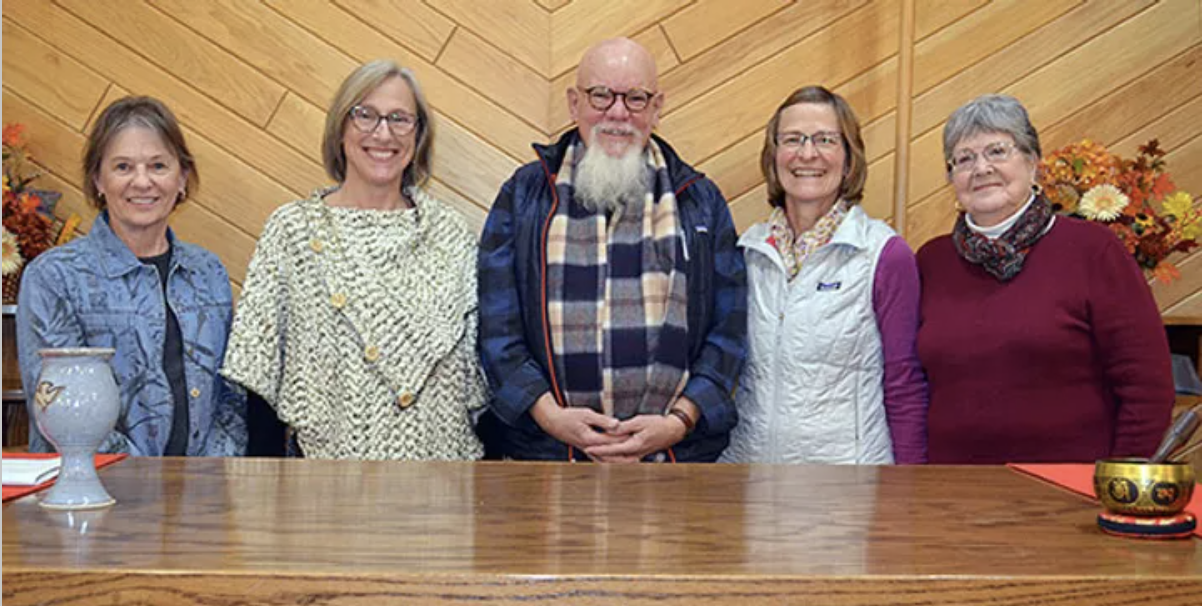 A new congregation in the Catholic tradition has been meeting for about a year and a half at Lutheran Church of the Master in Coeur d’Alene. They worship at 5 p.m. first and third Saturdays. Community of the Holy Spirit is part of the Ecumenical Catholic Communion (ECC), with roots in the Old Catholic Church of Utrecht that challenged Vatican I’s papal infallibility and yet is consistent with apostolic Catholic theology of Vatican II.

Holy Spirit came into being through efforts of four women who are its pastoral team: Benedictine oblates Ev Burns, Terese Fandel, Bonnie Parden and Phyllis Rossi. They describe it as a Eucharistic community, meaning Eucharist, or Holy Communion, is central in liturgy. The Ecumenical Catholic Communion (ECC) is inclusive of everyone, so one doesn’t have to be a member to receive Eucharist.

Full, active participation of the congregation is welcomed, encouraged and happens, they said. As part of belief in the priesthood of the people, the bread and wine are consecrated together by the congregation. “In striving to follow Jesus’ example and teachings, we believe everyone is beloved and welcome at the Table of the Lord,” they said.

The team’s background as Benedictine oblates influences the liturgy, said Terese. Worship has a contemplative bent, inviting those present to slow down to listen to the Holy Spirit speak to them. “In silence and stillness, I can find my centering spot,” said Ev.

Holy Spirit has a core of 20 people who gather for worship. Many are former Roman Catholics. While it is mostly older people, Terese said, the community is exploring ways to speak to younger adults and families who might be seeking a faith community.

Children receive communion whenever they are able to hold the bread. They use leavened—yeasted—bread, embracing the practice of the Eastern Orthodox tradition as an “ecumenical gesture, and because the bread appears as real food,” said Father Jim Murphy, the community’s sacramental minister. “We are called to be Christ for the world.” By that he means to be concerned for the environment, workers’ rights and respecting the wisdom in other traditions.

The team is discussing expanding its ministry by deepening faith experiences, such as the use of Centering Prayer, movement prayer—yoga, labyrinth—Lectio with art and poetry, and with the Enneagram, a model of the human psyche that can increase self-awareness and spiritual growth. “The common thread is that these are communal practices of being open to the Spirit in community,” he said.
​
“Outreach is an important part of Community of the Holy Spirit,” Phyllis said. “We are looking for new ways to do this.” The congregation is helping Lutheran Church of the Master, which is at 4800 Ramsey Rd., in their weekly Daily Bread meal at 1:30 p.m., Sundays, for those in need in the Coeur d’Alene area. Two members visited a Syrian refugee camp in Greece in 2018, she said. Others donated for the trip. Those contributions helped purchase clothes and a washing machine for the refugees. “We were grateful that a couple from our parish was able to travel there to offer service,” said Terese. “Our benefit has been knowing we were able to help people in need.”
​
Since the late 1990s, the women met as Roman Catholics to study the Rule of St. Benedict and deepen their ability to live faithful lives.

Terese grew up with Benedictines in Minnesota. She is a physician and works with her physician husband in North Idaho.

In her 30s, she wanted a more formal relationship with the Benedictines, leading her to become an oblate, a person who follows the Rule of St. Benedict, but outside of a religious community. For 20 years, Phyllis went to many retreats at the Monastery of St. Gertrude in Cottonwood, Idaho. The sisters’ hospitality and welcoming inspired her. Bonnie became an oblate more recently, inspired by people open to questions and exploring their faith in community. The group felt like home to her.

Jim’s background is as a Trappist monk. Trappists also follow the Rule of St. Benedict. He worked as a hospital chaplain since 1982 and recently retired from Kootenai Health. It was a long process for him to leave the Roman Catholic church as he saw church practices grow away from Vatican II under Popes John Paul II and Benedict. “The Roman Catholic Church sees the priest as ‘alter-Christi,’ a stand-in for Christ, when presiding,” he said. “At the hospital, I watched nurses care for patients at 2 a.m., along with doctors and housekeepers. I saw them be Christ for other people every day.” He was concerned that the church treated women as second-class citizens and gay people suffered under the church’s practices. “My wife and I were like Goldilocks,” he said. “We tried many churches. About five or six years ago, we found St. Clare’s Ecumenical Catholic Church in Spokane through a newspaper article. When we attended, it clicked.”

Going on a retreat in Oregon, Terese was met at the airport by a priest in the Ecumenical Catholic Communion. He told her of this new rendition of Catholicism that understands all people to be equally important in the eyes of God. It welcomes women and LGBTQ individuals into full participation, including being ordained as priests and bishops. Terese was intrigued. She brought this information to her study group. They had heard of St. Clare’s ECC in Spokane. When they attended mass there, they wondered how to bring such inclusive worship to Coeur d’Alene.

She and Jim, who has been ordained as a priest at St. Clare’s, went to lunch. Jim agreed to lead worship for a small group at Phyllis’ house in January 2018. They met there regularly for worship.

“We asked St. Clare’s if we could be a mission of their congregation,” said Terese.
Jim agreed to be their priest. After meeting for six months in Phyllis’ home, they realized that to grow, they needed a larger space. Lutheran Church of the Master welcomed them. “We’re growing in many ways other than numbers,” said Phyllis.
“We hope to meet the change in spirituality in the culture by offering alternatives,” said Terese.
“We needed a community that’s open. We want to give a home to people who wouldn’t feel welcomed in other churches.”
“Through Spirit-guidance and wisdom, Holy Spirit is an emerging church,” said Ev. “We needed courage to be Catholic in another way. The Holy Spirit was moving. We saw people hungry for that.”
“Participation is active, inclusive and egalitarian,” Bonnie said. “We strive to value ourselves and others as beloved, accepted and of infinite worth and potential.”
“That makes me responsible for my faith,” Ev said. “It’s not up to someone else.”

Opening Holy Spirit prompted Terese to re-evaluate her goals. She enrolled in the master’s in theology and leadership program at Gonzaga. A few months later, she retired from pathology and is now discerning about seeking ordination in the Ecumenical Catholic Communion.

“We offer an alternative model of church,” said Terese. “We want to live out Vatican II, to be an example of what the church could be. Holy Spirit gives us the opportunity to be the change we want to see in the world.”